Breeding box turtles in captivity is not difficult as long as you have healthy turtles and a proper environment.
Hibernation is also an important factor for the reproductive cycles of both sexes.  During this time,
hormones are produced and reproductive organs go through changes.
After coming out of hibernation, it is suggested to keep the males
and females separate until they are eating well and are active.
As previously mentioned, males have a concavity to their plastrons while females
have a flatness to theirs.  This concavity aids the males in mounting the females during breeding.
The flat or sometimes convex plastron of the female allows for slightly larger body cavity for developing eggs.
Male box turtles have a thicker tail, with the cloaca (a vent in the tail) closer to the end as
compared to the females thinner tail with the cloaca closer to the shell.  It is also said that males have red eyes.
That is true, but I also have seen red-eyed females.  Most females have brown eyes.

Below are photos to show the difference of a male and female box turtle. 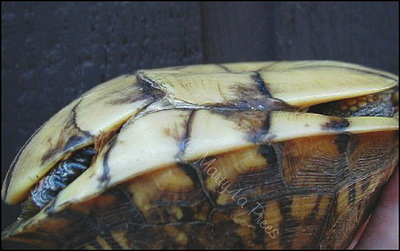 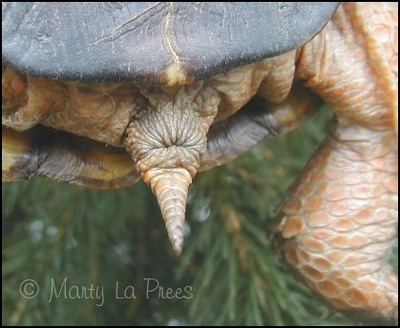 The plastron of a female is flat and the cloaca of the female box turtle is closer to the marginal scutes. 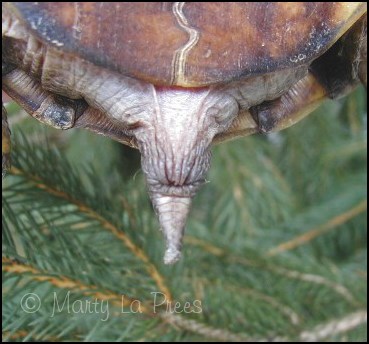 Notice the concavity of a male turtle's plastron.   The cloaca of the male box turtle is closer to the tip of his tail. 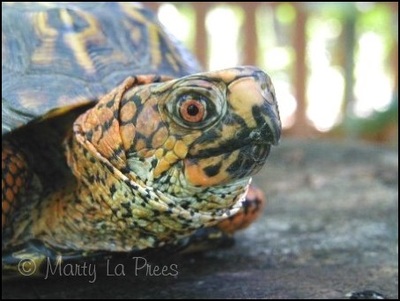 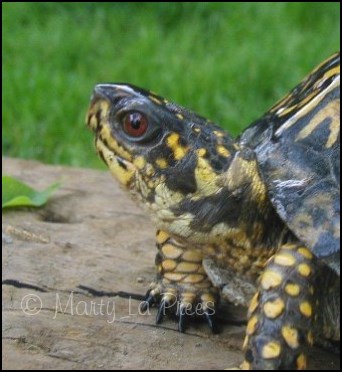 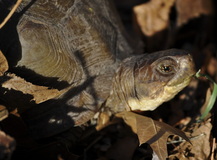 Often times, people believe that the male box turtles are the ones with the red eyes.  While typically females have brown eyes, I have discovered that some females also have red eyes. 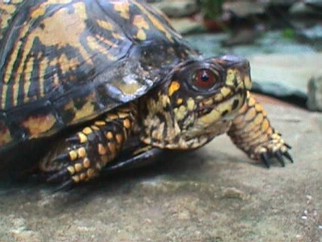 This female Eastern Box turtle will be laying her eggs soon.
There are several ways I determine if any of my females are gravid.
I weigh them regularly and note when there is a gain in weight.
Also, I palpate for eggs in front of the back legs behind the
bridge of the shell.  Below, you can see the technique I use to palpate
for eggs.  Placing your cursor over each picture, will give you a description.
While this looks a bit aggressive, it is not putting the turtle
in any danger.  This can be used on other species of turtles and tortoises. 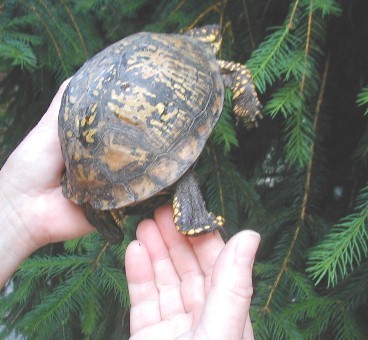 After extending a back leg, it is held outside the shell edge. 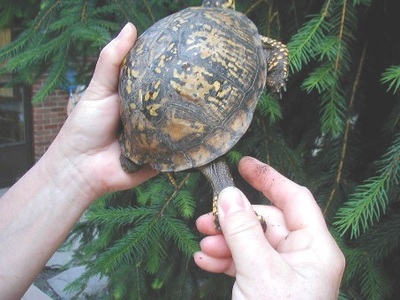 I then insert my finger in front of the leg in the soft tissue area. 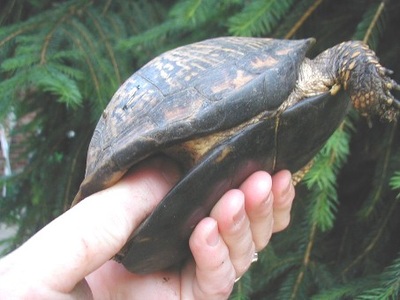 I insert my finger as far in as possible. At this point, you may be able to feel eggs. 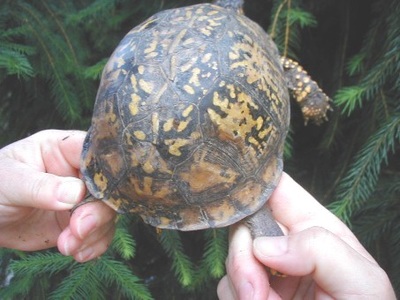 Palpation is continued on the opposite side. 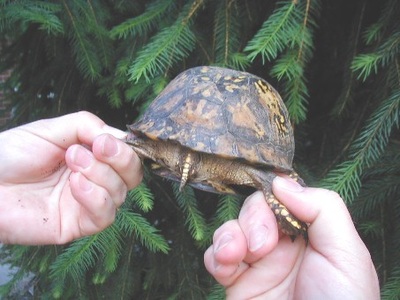 Pushing carefully, I feel for eggs, sometimes tilting the turtle to allow any eggs to move to one side. 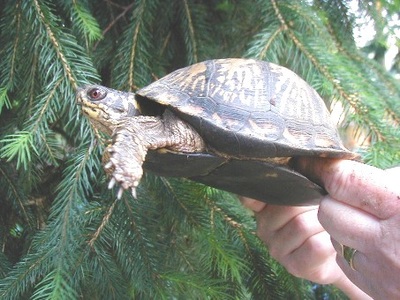 Here is a side view of palpating for eggs.
Once laid, it is best to remove the eggs and incubate them properly.  You can leave them in the ground but the nest area should be protected from other turtles and native animals that may come into the area.   Some aquatic turtles will lay
eggs in the water.  Usually, these are not fertile, but if you can remove them, it is worth trying to incubating them.
You must be very careful when opening a nest.   I use a paint brush and slowly brush the dirt away.  This is a very
time consuming process because the dirt is packed very tight.  When removing eggs, do not jostle or rotate them.
The eggs should be placed in an incubator, purchased or home made. I use a plastic bowl, placing damp sphagnum
moss or vermiculite at least 2 inches deep.  I then make an indentation for the egg to be placed in.  A thin layer of
moss is placed over the top of the eggs and a lid is loosely placed on the top.  Humidity is very important for incubation.
You do not want it to be soaking wet, but just lightly damp.   The temperature should be around 80 degrees.    I keep my temperature around 82 for my box turtle eggs.  Also, higher temperatures produce female hatchlings.  Do not be
alarmed if some of the eggs sink in.  This happens in clutches.  It does not necessarily mean that they are not fertile.
Unless they are very flat and/or split, I will continue to incubate them.  The eggs typically hatch at around 70 days,
but again, it depends on humidity and temperatures. 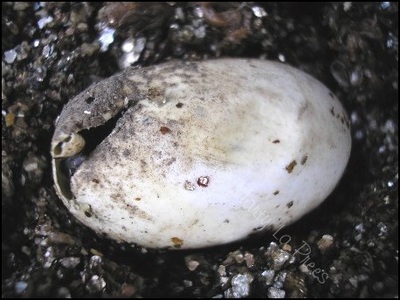 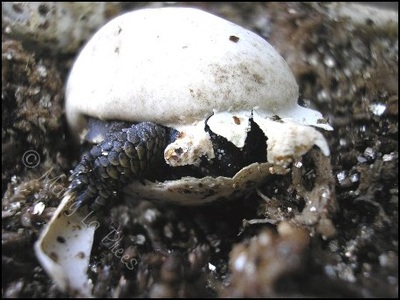 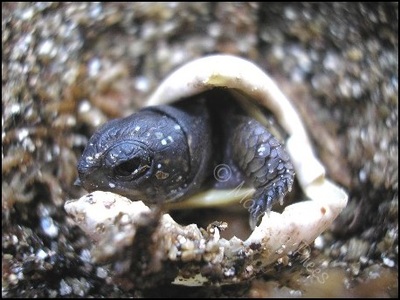 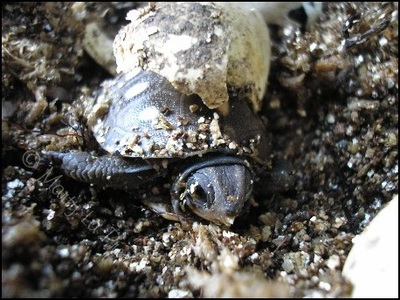 It takes quite a while for a baby to exit the egg, sometimes up to a day or two.  It will use the egg tooth to begin the
process by cracking the shell.    You can imagine how tired this little one will be by the time it is completely out of the shell.

At Indiana Turtle Care, baby turtles are measured and weighed every 6 months.  Each turtle has a record sheet
where information is available to compare proper growth rate. 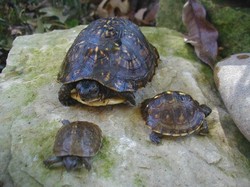 This photo shows a 6 month old, a one year old and a 2 year old box turtle.